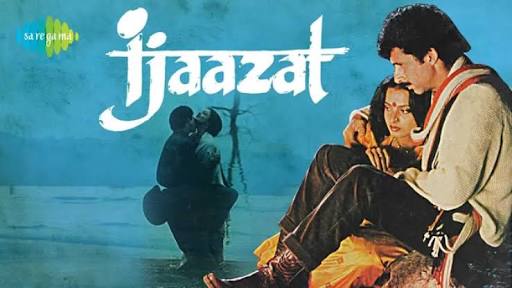 Sudha and Mahendra meet at a waiting room of a railway station five years after they separate as husband and wife. Initially a little awkward and apprehensive, they start to make small conversations.

In one such conversation, Sudha asks Mahendra

In another scene, Mahendra forgets his matchbox and Sudha hands it to him from her own purse:

In yet another scene, the light goes off. In an attempt to find a lamp, Sudha and Mahendra both try to walk out of the waiting room. Sudha, unable to see in the darkness, gets hit by a chair in the way. Mahendra suddenly screams on Sudha for being careless. After a few moments, Mahendra apologizes.

And I want to repeat here, we are talking about a movie released twenty years ago from today. Can we pin-point a movie from the last five years exhibiting such a deep level of maturity among the characters? From all the movies directed by Gulzar Saab, I find Ijaazat to be his finest creation. With the exceptional acting from all the three leads and the unforgettable songs from the master R D Burman, the final outcome is no less than lethal.

Ijaazat, at the time of its release was considered “Art-House”. But I find it extremely mainstream and relevant. In fact, it is so natural and real, that it doesn’t feel like a movie at all. Mahendra is Mahendra not Naseeruddin Shah. Sudha is Sudha – nothing like the Diva she was. And considering the extremely dramatic, over the top and gross movies released in the 1980s, Ijaazat was a breath of fresh air.

Gulzar saab has very stringently maintained the somber and sublime mood of the movie throughout. And there is a high level of maturity between his characters that never goes away. The movie is slow, but not boring. There is a “Thehraav” yet it makes you constantly curious. Be it other movies Aandhi or Parichay or Khushboo – this maturity, this “Thehraav” is always there. It lingers and stays. And months after you have watched the movie, you still remember it and feel good.

Every scene has that one moment of one image that is done with a great thought. So whether it’s the yearning with which Mahendra looks at Sudha or the way Maya talks over the phone or Sudha just picking up mahendra’s stuff while crying, everything has a context and fits perfectly.

I think it must be Rekha’s one of the most underplayed acts. She looks exquisite, though most part of the movie, she is wearing a single saree and a “chashma”.

And of course with an actor of Naseeruddin Shah’s calibre and the expert guidance of Gulzar, the character of Mahendra was bound to be excellent. But one cannot just neglect the obvious hard work the pair has put in to make almost every frame, every scene unforgetable.

And of course, we cant forget the haunting “Mera kuch saman”. Ijaazat wouldn’t be that beautiful without this one incredible song. Even after so many years, a single line from that song can have the same stirring effect.

Ijaazat was one classic movie which definitely deserved more than what it got. Ijaazat still is one of the best movies about love, loss, pain, obsession, loyalty and much more. But most important, Ijaazat is one movie which can be considered as a benchmark in cinematic standards.

I will be watching the movie next time I get a chance for sure.
Untill then..”Mera kuch samaan….”